“every day is a celebration”

One morning last week, as I was thumbing through my paper and munching my English muffin, I came across an article that stuck with me.  Various parts of it have been playing through my mind ever since.  It is about a local couple who are celebrating their 70th wedding anniversary.  Yes, you read that right — 70 years of marriage to the same person.  That alone is mind-boggling in this day and age, but it is other aspects of the article that I find more poignant….  and perhaps those other aspects are the explanation to the time-honored question of “What’s their secret?!”

Before I go any further, I’d suggest you read the article, here.   It’s short and it will open in another tab, so you won’t lose me!  I’ll wait.

The first time I read the article, something tugged at me, but I turned the page and put it down to sentimentalism, plain and simple.  But it was more than that, and when I returned to the article later that night, I saw clearly and with amazement the pieces that are profound and precious to me in this article.

1.  Don carries a scrapbook in his briefcase of memories of their life together.

Sure, this is a little cutesy for most people, and most guys wouldn’t be comfortable putting together a scrapbook, let alone carrying it around for years.  But the point here is that it embodies his priorities.  Just from that one fact, do you have any doubts of where his personal priorities lie?  Do you suppose his children ever wondered if their parents loved each other?

Most of us sketch our distant memories in broad strokes.  It is only the truly important moments that we lock away with all of our senses intact.  I, for instance, remember exactly how Sabrina felt and smelled when they first placed her in my arms — the weight of her, the color of her hair, the pain my body was still accommodating to from my emergency c-section, the tears in my husband’s eyes, the stuffiness of the room — all of it frozen in my memory.  But Don, it seems, has many, many memories of Dorthy that are like that.  I love that he remembered “how the humidity melted her hair” when she stepped off the plane.   I am lost in imagining him watching her, absorbing her, after missing her for a while.  Sigh.

3.  Don is proud of Dorothy’s accomplishments.

Before any of you start shaking your head and saying, “Well, of course he should be!” let me point out two very important things:  FIRST, let’s remember that they were married in 1942.  They are almost two generations removed from most of us.  Feminism was not even a word then, and women’s rights still referred to the suffragette’s successful battle to obtain the vote.  This was an era and a generation when most women did precisely and only what their husbands allowed them to do.   No kidding.  And look what Don allowed Dorothy to do — to live up to her potential as a human being.  She did amazing things, in an age when only men did such things.  And she did it with a husband.  Seriously wow.

SECOND, let’s to be truthful here:  this is still rare.  I hear story after story after sad story about women who bind their lives to men who are threatened by their potential or desire to be more than a wife and mother.  Being a good wife and a good mother are both laudable goals, to be sure, but for most of us, they are not the end of our aspirations.  When I was married, had I suggested that I was going to attend a civil rights march, my husband would have looked at me like I was crazy.  It was all fine and well for me to pursue my personal interests and causes, as long as it didn’t inconvenience him too much.  And I’m not alone in having lived that at the turn of the 20th Century.

So kudos to Don, for selecting an amazing woman and then supporting her dreams.  Nicely done.

4.  When Don describes Dorothy’s attributes, he lists aspects of who she is, not what she does for him or anyone else.

This is the part that makes the romantic in me want to cry.  Don says this about Dorothy:

“She’s a caring, kind, empathetic and a super good listener.  She says very little but she’s extremely effective. She charms people and gets groups together and makes things happen.”

This is who Dorothy is as a person; he sees her fully — her abilities and personality as they stand on their own, not simply in reference to him.  There is no mention of how good a cook she is or how she starched his shirts for 70 years or how she played with the kids when they were toddlers.  But this is how we usually reference our  love for our partners — based on what they do for us, not on who they are independent of us.  Listen closely the next time someone describes their husband or wife — “He’s a good provider.”  “She’s a good mom.”  “He mows the lawn every Saturday.” “She makes a great pot roast, and that’s my favorite.”  and so on and so forth.  At first glance, this sounds sweet — don’t we all hope that the people we care for and nurture will notice and appreciate that? — but it’s actually a failure to fully see each other.  Appreciation is important, but if you look at the kinds of things I just listed, you’ll see that those are appreciation for roles we fill in our partnerships and lives, they are jobs we do, and an acknowledgment that we do them well.  Those compliments are not an acknowledgment of who we fundamentally are inside — the special parts of us that we bring to the people whose lives we touch everyday.

Now look again at Don’s list.  See the difference?  Hear the respect and admiration?  He sees her.  Fully.  And admires her.  Not for the roles she fills, but because she is those things, and she brings those things to everything she does and every role she fills because they are who she is.  It is possible that Dorothy was a terrible cook, and maybe Don would have liked a good pot roast once in a while, but how many of us want someone to choose us for our culinary skills?  Or for any particular role, in fact?  In all likelihood, she wasn’t a perfect mother (still looking for that animal…), but if she was “kind, caring, empathetic, and a good listener,” how bad a mom could she have been? Don’s description speaks of who Dorothy is in every role she fills, because it is simply who she is, period.

The difference is subtle, but very, very important, I think.  Because as we move through a lifetime together, roles may change.  Skills may be gained and even lost.  But I think what most of us want is to be loved for who we simply are, when the roles and academic degrees and accumulated professional accomplishments are stripped away.  We want to be loved for our sense of humor, our way with words, the gentleness of our caress.  Filling particular roles well can be rewarding and appreciation is always good, but to be appreciated without being fully seen is hollow at best and soul-crushing at worst.

Now, I will admit that Don is probably a bit of a romantic sentimentalist.  But the man is 90-years-old, so I am going to grant him the right to be gushy and mushy and over-the-top about the accomplishment of notching a 70-year marriage.  But really, how many of us are in a position to criticize his approach or his feelings?

So instead, I wish the Stonebrakers a very happy anniversary and many more scrapbook pages to come. 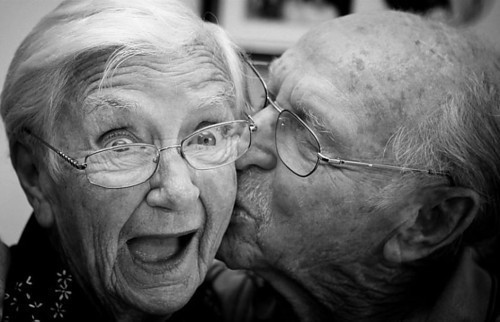 Not the Stonebrakers — but I looooove this photo! 🙂