My friend Annie got back from a short vacation last night, and before we even put our children into their respective beds, I had unloaded on her the detritus of a stressful week.  The expense and hassle of purchasing three new appliances, one of which has flooded my laundry room (twice!).  The predictable but still painful family arguments around the disposition of my aunt’s belongings.  A disagreement with James.  Essentially the stuff that is life, but a heavier burden when carried alone.

I remember once when I was a small child and my widowed mother had very little money, our dishwasher flooded the kitchen for the second or third time in as many weeks.  My mom sat on the kitchen floor, amidst the soapy mess, and sobbed.  Overwhelmed and lonely, she couldn’t move until there weren’t any tears left.  Then she fetched some towels and began the frustrating process of sopping up all that water, as I perched on the stairs and watched.

I have thought a lot about that day this week, as I’ve mopped up my own soapy messes.  Twice.

Nearly every marriage has some big parts that really work.  For me and Bryce, it was the rough times.  Unlike some couples, we were at our best when facing a challenge together, shoulder-to-shoulder.  Whether it was Sabrina’s serious health concerns or Bryce’s dual lay-offs in one year, we just braced ourselves and carried on, in sync.

One of the shames of divorce is that you have to divorce the whole person.   You don’t get to pick and choose which pieces of them you’d like to never see again.  The baby goes out with the bathwater, so to speak.

Since I left Bryce, I have not had another relationship that felt as reliable or solid as that one.  I miss that in my life.  I really do.  But in the absence of that particular kind of comfort, I have discovered a nearly-as-good substitute in my friends.

Sometime early in our friendship — before I’d even left Bryce — Annie and I fell into a certain unspoken deal with each other:  if one of us needs someone, no matter the time or inconvenience, the other is there.  We have each had moments in which we’ve dropped everything at work, or plopped our children in front of a movie, or told a date that it would “just be a minute” so that we could attend to whatever small or large crisis had exploded in the other’s world.  Sometimes there have been tears, sometimes curse words, sometimes desperation, and sometimes anguish.  Sometimes we have come through for each other better than at other times, but we have always been there.

A few years ago, I couldn’t have appreciated this in the same way, and I didn’t ask it of my friends then, either.  But when, after many, many years, you suddenly find yourself without someone solid to lean on in the dark or difficult times, friendships take on a different quality.

When I was in my 20’s and still believed that I was Superwoman, I had a therapist ask me where I unpacked my load.  I had no earthly idea what she meant, but it sounded vaguely sexual to me and I was embarrassed by the question.  What she meant, of course, was simply where was I safe enough to let it all out?  To allow all my deepest fears and hopes and dreams to get some air.  At that time, I had no answer for her.   Her question has stayed with me for all these years.

I realized this week that it is still a question I struggle with, but the closest I come to that safety is with my female friends.  With a few of them — like Annie — I don’t have to be always smart or always accomplished or always fun.  Sometimes I’m not any of those things.  Sometimes I’m frustrated and overwhelmed and sad.  And I thank God that I have people in my life who can handle me that way.

I am constantly amazed at how much better I feel after talking to a friend and unpacking my heavy load.  It’s enough to give me the strength to re-pack it and carry it for another day.

Now if you’ll excuse me, I have to go meet the washing machine repairman.  Again. 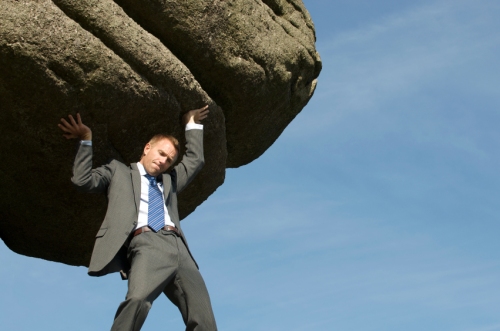 tell me what's on your mind.... Cancel reply